As part of Oregon Healthiest State, the Blue Zones Project makes healthy choices easier for the community of Klamath Falls.

By Peggy Maguire and Paul Stewart 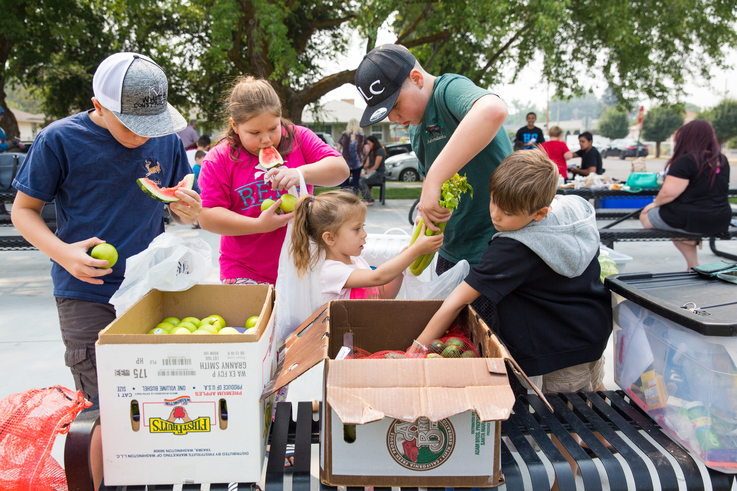 Like many communities across the country, Klamath Falls was not always particularly healthy.  But today, in partnership with Cambia Health Foundation and Oregon Healthiest State, Klamath Falls is a model for what businesses, healthcare, and philanthropy can do to create greater well-being across an entire community.  We believe this success can be duplicated across Oregon, and we are urging more communities and their local businesses to join us in making our state the healthiest in the nation.

It all started four years ago, when Cambia Health Foundation invested $12 Million in the Oregon Heathiest State Initiative, which is helping improve the health of communities across the state through the Blue Zones Project.  Blue Zones Project helps communities change policies, create social connection, and engage multiple sectors to improve the health and well-being of residents, reduce healthcare costs, and increase civic engagement.

We are already seeing the efforts pay off in Klamath Falls, where Cambia Health Foundation partnered with Sky Lakes Medical Center to start funding the first Blue Zones Project three years ago.  Local enthusiasm around the initiative began when the community realized that their health and well-being indicators were among the lowest in the state.  With leadership and direct of a Local Steering Committee, Blue Zones Project provided the guidance, prioritization, and infrastructure to help the community’s schools, restaurants, grocery stores, and other businesses implement best practices to address the poor health outcomes.

Today, Klamath Falls has smoke free parks; cooking classes and healthier food options at school cafeterias, restaurants, and businesses; better access to safe places to be physically active; and residents who are more poised than ever to look out for each other’s health and well-being.

When you visit Klamath Falls, you can feel the positive impact of the Blue Zones Project in the atmosphere. Residents are taking charge of their own health and getting involved in the community. According to the Gallup-Sharecare Well-Being Index, there has been a reduction in smoking, improvements in regular physical activity, increased volunteerism, and an increase in community pride. This palpable impact on people’s well-being and sense of community is happening just three years after the Blue Zones Project began its transformation efforts. We believe the community has really reached a tipping point and has gained national attention as a Robert Wood Johnson Culture of Health Prize winner for 2018.

Now the community plans to sustain this momentum, and has transitioned to a locally-funded model to continue the effort for three more years.  Sky Lakes Medical Center will fund up to 50 percent of the project going forward, as an extension of its mission to improve the culture of health in the community.  Other local funders include the City of Klamath Falls, Klamath County, Cascade Health Alliance, and private donations.

Today, leaders from other parts of the state are reaching out as well, so they can learn how to replicate sustainable improvements in health in their communities.  We and the communities involved are thrilled to share what we’ve learned.  We hope more communities will join us in this long-term strategy to improve health and well-being at the local-level – the only way it can truly be done – so we can see Oregon become the healthiest state in the nation.

Klamath Falls Gets Positive Well-Being Progress Report
The 2018 Third Klamath Falls Gallup WBI Oversample Results showed the community has fared better than the national average for overall well-being including increases in purpose, financial, and sense of community over the previous year.  Since 2015, Klamath Falls has experienced other well-being improvements: